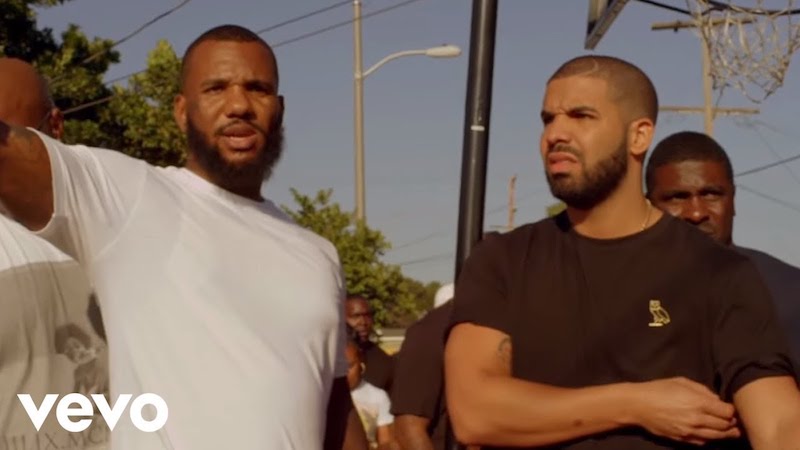 The Game and Drake in the "100" music video. Image source: YouTube.

The Game recently shed some light on a controversial line from Drake’s distant past. Will it come back to bite, or is it old news?

You may remember a collab featuring Drake and The Game called “100.” This 2015 single drew some controversy, specifically for Drizzy’s verse at the time. Many rap fans took the line “I would have all of your fans if I didn’t go pop and I stayed on some conscious shit” as a diss to Kendrick Lamar. While chatting with HipHopDX, the West Coast rapper clarified his feelings on the supposed diss.

“I didn’t feel like that, And if I did, I wouldn’t have put the song out.” The Game said. “Like I said, Kendrick’s my brother – I love him too. But if Drake was subliminal and slipped something in, again, he’s one of the best to ever do it, so it’s Hip Hop. Even Kendrick is lyrically equipped to catch any stray and return fire, so I think at the end of the day, it’s all good Hip Hop. It ain’t like Kendrick and Drake are about to go into a street war or something like that.”

He continued to explain his stance on the long-rumored Kendrick/Drake beef, “If Drake was taking subliminals at Kendrick on that song and Kendrick wanted to return something, I think that would be great for Hip Hop. I think that sometimes, rap battles, even subliminally in different songs, are healthy for Hip Hop too. ‘Cause if you think about, or no matter how you think about it, it’s a competition. There’s only one No. 1 spot at the top of the Billboard or the top of any chart. Everybody wants to have it.”

“So, you know, climbing the ladder, knocking people down, kicking people off, it’s just part of the competitive nature of music as a whole,” he finished.

The Game isn’t the only one gunning for a rivalry between Drake and Kendrick. Joe Budden echoed these same thoughts on a 2021 episode of The Joe Budden Podcast. He believes a blow-up between the Canadian and LA artists two has been brewing, and a line in “Family Ties” was Kendrick’s warning shot.

“Smokin’ on top fives/Motherfuck that album, fuck that single/Burn that hard drive (Burn that shit)”

He proceeded with his point, “You’re falling for the consumer Kendrick trick, And that trick is going to allow him to have a crutch, so when he’s asked about it in interviews, he can give us that same bullshit that he gave us with ‘Control’: ‘Oh, that’s to whoever, take it how you want.’ No, no, no.”

When asked who he believes Kendrick is referring to with “Smokin’ on top fives,” Joe threw Drake’s name in the mix with some sly remarks for good measure. “I have a hybrid strain of Drake and J. Cole a little bit in there. But this is a Toronto mansion, Degrassi special strain.”

Not Taking The Bait

Of course, rivalry and competitiveness are vast components of rap music. It’s no wonder the industry’s biggest stars like Drake, Kendrick, or The Game are constantly pitted against each other. However, when The Game was asked to pick sides, he gave a particularly non-aligned response. “Who I got? Lyrically? I don’t know, man. Kendrick is just too fucking incredible,” he answered. “And then Drake is so dope too, man. I mean, I would just like to be a fan of the moment and sit back and watch two of the greatest artists of all time have a go.”

Despite all the buzz surrounding a possible tension between Drake and Lamar, both artists have been quiet. Drake was one of several rappers Kendrick called out in his 2013 “Control” verse. Drake seemed unmoved by the name drop when asked about this in Vibe magazine that year.

“I never once said he’s a bad guy [or] I don’t like him,” he clarified. “I think he’s a fucking genius in his own right, but I also stood my ground as I should. And with that came another step, which then I have to realize I’m being baited and I’m not gonna fall. Jordan doesn’t have to play pickup to prove that he could play ball, no offense.”

Since then, the “Sticky” rapper has kept that word and held his guns regarding Kendrick. It’ll likely remain that way, but there’s no telling what the future holds for rap’s most prominent front runners.