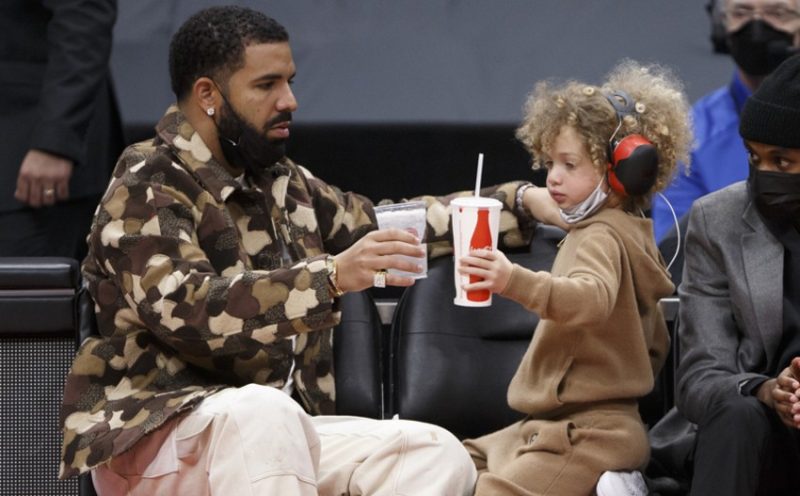 Toronto rapper Drake and his son Adonis cheers cups during the NBA game between the Toronto Raptors and the Chicago Bulls. Image source: Cole Burston/Getty Images.

Cedric Bowden, who went viral online for trolling Drake on Instagram, actually wants to meet the Toronto Rapper in real life. Their initial interaction gained traction when the man heckled Drake in his Instagram comments.

At the time, he said, “Ya son prolly play with ghostwriters.” Drake didn’t like this, however, and trolled Bowden right back. “I just followed your girl ’cause she’s prob miserable and needs some excitement in her life,” said Drizzy. He followed through on this.

Hours later, Toni Bowden’s Instagram followers shot up, which sent Twitter into a frenzy. Toni responded to the situation on Instagram, and Drake responded by sending her a DM. “I’m here for u ma,” read the message. Cedric and Toni sat for an interview with TMZ Hip-Hop. In the interview, Bowden explained his side of the story.

Toni said on Friday she was resuming her normal posting and did.
Ced is still posting every mention of "Drake troll" he sees or hears and doing promo posts.
And telling t shirts with the OVO logo.
He is 35 years old. https://t.co/t4czAVqGom

For one, everyone knows or thinks Drake has ghostwriters. “I’m a fan of Meek Mill so when Meek said it, I truly believed it. Honestly, I didn’t think that comment would go anywhere,” said Bowden.

Toni said, “I have so much fun in my life, ever since I married this man. But lucky me!” According to her, this situation created no problems between her and Cedric.

When asked if he went too far in bringing up Drake’s child, Adonis, Drake’s Instagram troll said the rapper went too far by DMing his wife. However, he taunted Drake first. Overall, the couple seems to be in good spirits about the whole ordeal. “I mean, he kinda crossed the line, but it’s all love,” he said. Cedric even had kind words about Drake’s “Certified Lover Boy” album and referred to himself as one of Drake’s biggest fans. It’s unclear what’ll happen next between the two men, but it seems the “beef” is over.