Freddie Gibbs and Benny Butcher (well…his team) decided to square up this past weekend. The group of individuals ambushed the Bandana rapper before his performance at Buffalo‘s Dinosaur Bar-B-Que restaurant.

The tussle stems from the MC’s beef throughout these past months.

The video shows Gibbs getting physically assaulted by what seems to be Butcher’s entourage. While Freddie is getting battered down, one person says, “Welcome to Buffalo.” The rapper was at this venue on Saturday for his Space Rabbit Tour.

After the fight, photos of Gibbs spread like wildfire. On Monday, several snaps went on Twitter of him donning a ski mask. Did he leave Benny’s hometown? No. But his swollen eye might promise a swift arrival in due time.

Sources also add that Gibbs left without his chain. But, the rapper put these rumors to rest after showcasing a screenshot of a text exchange. Others believe the “Gang Sign” spitter penned the messages.

Had Gibbs not taunted Butcher online, all of this could’ve been avoided. 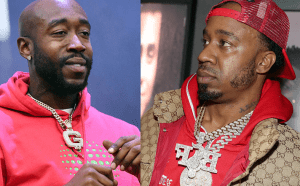 The back-and-forth between the two started in March. Gibbs, who clowned other MCs in the past, decided to have a go at Butcher. The “Johnny P’s Caddy” collaborator stated during an interview on Spotify’s Most Necessary: Live that he and Gibb’s working relationship “came and went.”

Gibbs obviously didn’t take this comment lightly. Rather than speaking to the rapper directly, he took jabs and him and his team. He even ridiculed Benny for getting shot in the leg amidst an attempted robbery in 2020.

Yikes, let’s hope Butcher and Gibbs become cordial soon. ‘Till then, stay tuned at FMHipHop for the newest scoop!