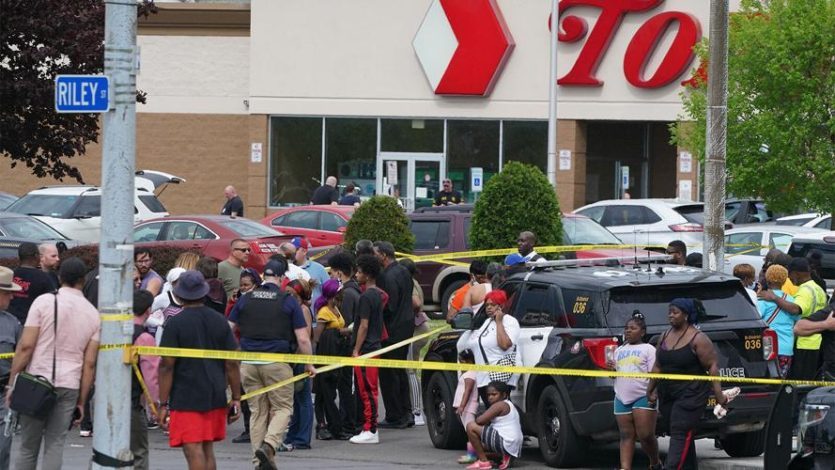 On Saturday, ten people lost their lives in a horrifying mass shooting at a Buffalo supermarket. Officials quickly called the shooting “pure evil” and racially motivated.

The Tops Markets at 1275 Jefferson Avenue bustled with shoppers in a predominantly black community as shoppers enjoyed a warm afternoon in May.

“It’s the weekend, so it was packed,” said Shonnell Harris, an operation manager working at the Tops during the shooting.

Harris remembers running frantically through the store when she heard gunshots, falling several times before eventually exiting the rear of the building. She described the shooter as a white man wearing camouflage clothing.

“He looked like he was in the Army,” she said. She thought she heard 70 shots.

Those Killed In The Buffalo Shooting

Buffalo Police Commissioner Joseph Gramaglia said the terrorist shot were 13 people. 11 were Black, and two were Caucasian. Most of the victims’ identities remain unknown as of late Saturday night. According to the news, one of the dead is Aaron Salter. He recently retired from the Buffalo Police Department and served as a security guard in the store. The other is Ruth Whitfield, the mother of former Buffalo Fire Commissioner Garnell Whitfield.

This is the worst shooting in Buffalo’s history.

“We are hurting, and we are seething right now as a community,” Buffalo Mayor Byron Brown stated during a news conference after the incident.

Katherine Crofton, a retired firefighter and medic observed the shooting from the porch of her home on Riley Street. She said she heard a shot while playing with her dog and smoking a cigarette.

“I didn’t see him at first, I turned around and I saw him shoot this woman,” Crofton said. “She was just going into the store. And then he shot another woman. She was putting groceries into her car. I got down because I did not know if he was going to shoot me.” 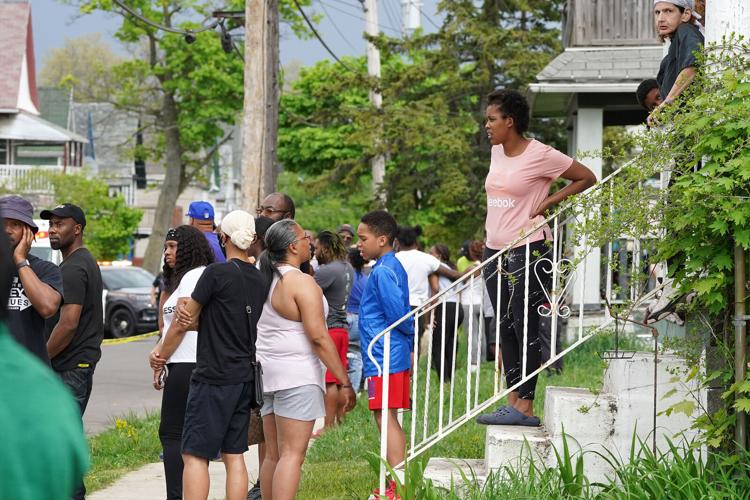 Residents of Buffalo watch the police respond to a mass shooting at the Tops Market on Jefferson Avenue. Credit: Mark Mulville/Buffalo News

Four of the individuals killed were employees at the store. Gramaglia reported that the security guard, who confronted the gunman, was among those killed. Gramaglia praised Salter as a hero.

Observing The Suspect In Action

Medical care was provided to the three injured victims at the Erie County Medical Center. One of the patients already left the hospital, and the two others were in stable condition as of Saturday night. While Braedyn Kaphart and Shayne Hill were pulling into a parking space in the Tops Market parking lot, they almost collided with the shooter as he exited the store. According to Kaphart, the shooter appeared to be preparing himself for suicide.

“He was standing there in his military gear with his weapon to his chin, looking like he was going to blow his head off,” Kaphart said. “We weren’t sure what was happening. As he continued to do that, he dropped to his knees still appearing as if he might shoot himself.”

Kaphart recalls looking away briefly as the police directed them to get back into their cars. Upon looking back, Kaphart noted that it appeared officers had tackled the man. In addition, Crofton observed that emergency responders had arrived.

“The guy walked out of the store, the cops were just screaming at him, and he just stood there. He just stood there. It was like he wanted them to shoot him,” Crofton said. As Crofton continued, the shooter began to remove his gear when another police car pulled up, causing officers to jump on him.

Saturday evening, Buffalo City Court Judge Craig Hannah arraigned the gunman on a charge of first-degree murder. He identifies as Payton Gendron, 18, of Conklin in Broome County, near Binghamton.

FBI local director Stephen Belongia stated that the agency is investigating this incident as a hate crime and a racially motivated violent extremist act.

According to a police officer at the scene, at least four bodies were found in the parking lot. Sources indicate that several other victims were located inside the store. The deceased also appeared to be hiding near the checkout counters. 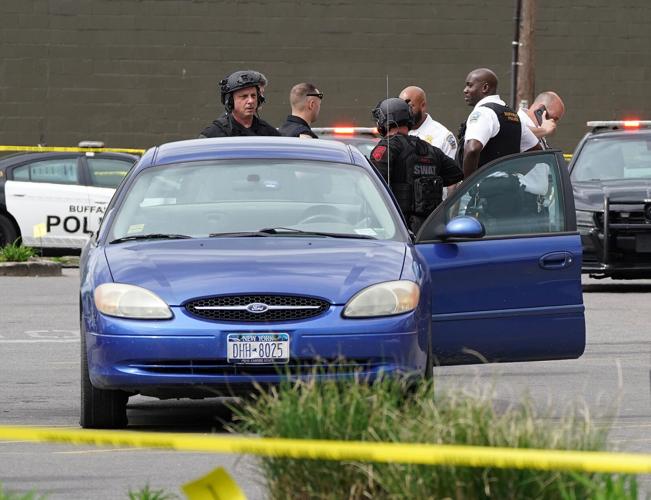 Following the mass shooting at the Tops Markets on Jefferson Avenue in Buffalo, police inspected a vehicle believed to be that of the suspect. Credit: Mark Mulville/Buffalo News

“It’s like walking onto a horror movie, but everything is real. It is Armageddon-like,” a police source told The News. “It is so overwhelming.”

“A racially motivated hate crime is abhorrent to the very fabric of this nation,” President Biden said in a statement released late Saturday night. “Any act of domestic terrorism, including an act perpetrated in the name of a repugnant white nationalist ideology, is antithetical to everything we stand for in America. Hate must have no safe harbor.”

A photograph from inside a courtroom shows a man in a white paper gown and a white face mask. 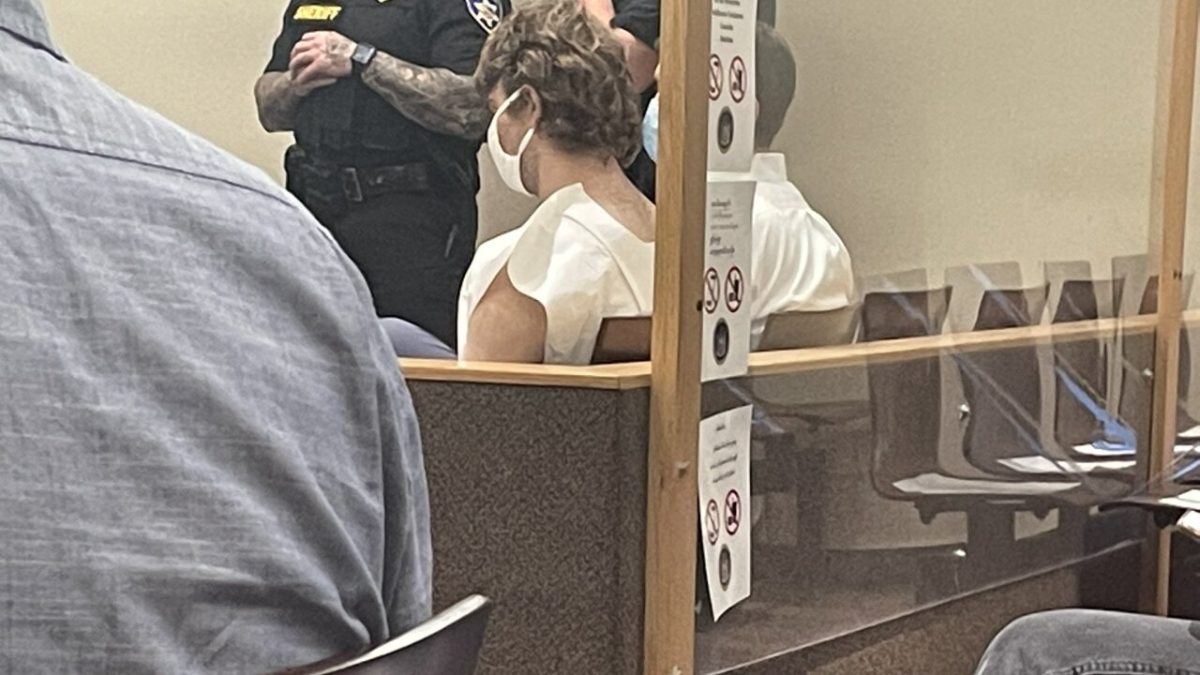 The suspect is sitting in a courtroom. Credit: WKBW/Eileen Buckley

The accused shooter, who will turn 19 next month, has very little online activity under that name. He previously attended SUNY Broome Community College but no longer does. A college spokeswoman did not state when he attended the college or what prompted him to leave.

“I have confirmed that we have a former student by that name. They are no longer enrolled,” Silvia C. Briga, director of marketing, communications, and public information at SUNY Broome, said in an email.

In addition, a 180-page manifesto filled with hate appeared after the mass shooting. For some time, no one would also confirm the shooter’s authorship behind the document.

Governor’s Comments on the Incident and Social Media

Moreover, Gov. Kathy Hochul, who arrived in Buffalo Saturday evening following a flight from Albany, described the shooting as an act of terrorism.

“It strikes us in our very heart to know that such evil lurks out there,” she said in a press conference. “Yes, I’m here to console the families and the community that is feeling so much pain right now, but mark my words, we’ll be aggressive in our pursuit of anyone who subscribes to the ideals professed by other white supremacists.”

Following this, Hochul attacked the social media sites that promote such views.

“Those who provide these platforms,” she said, “have a moral, an ethical and I hope to have a legal responsibility to ensure that such hate can not populate these sites, because this is the result.”

The police stated that the suspect wore body armor and a military helmet. Furthermore, he was armed with a high-powered rifle and live-streamed the incident.

“It’s like a dream, but I know it’s not a dream,” said Harris, the Tops operation manager. GYC Ministries pastor Tim Newkirk, with his arm around Harris, his sister, said, “It’s something you hear about, but you never experience.”

Our hearts go out to the families who have lost loved ones in this tragic shooting. You are in our thoughts and prayers.