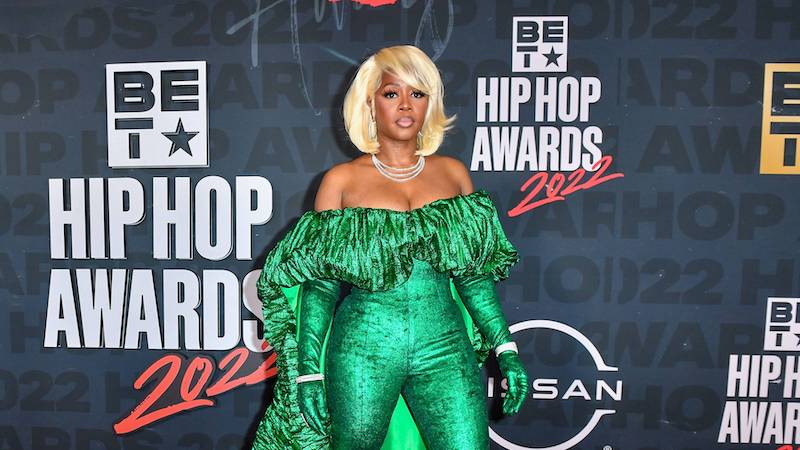 “Gangsta Grillz” is a legendary mixtape series, and DJ Drama never disappoints. He has been in the game for a very long time and has worked almost with every rapper. But Drama seems to have yet to find a woman artist to put on “Gangsta Grillz.”

Whether it be a rapper or singer, Drama has plenty of women to pull from. The “Gangsta Grillz” projects are mostly rap, but DJ Drama has also done a few R&B mixtapes with Chris Brown.

I would love to see him do a “Gangsta Grillz” with the women of the culture. But DJ Drama is legendary, so he can’t do it with just any artist. Here are the women who should join DJ Drama’s next “Gangsta Grillz.”

Fresh out of Florida, the City Girls is one of the hottest groups in the game. JT and Yung Miami made the industry fall in love with their energy, personality, and songs.

The City Girls have dropped a slew of hits since they started. Two classy women with a bit of street; they would work great with DJ Drama. With Drama himself coming from the South, I’m sure the trio could cook up a “Gangsta Grillz”-sounding production. City Girls x “Gangsta Grillz” could be a sound we didn’t know we needed.

Jazmine Sullivan is a whole legend in the culture! And so is DJ Drama! Jazmine hails from Philadelphia, so it wouldn’t be too hard for her to get with Drama. He is from Philly too! Also, Drama has a good relationship with Meek Mill since he hosted the “Dreamchasers” series. We all know Meek is from Philly, so another Philly artist should get her own “Gangsta Grillz” series.

Kash Doll is one of the hardest female rappers out! Drama always works with talented rappers, and here’s another candidate for a part on the “Gangsta Grillz” mixtape. Drama has yet to tap in with anyone from Detroit for a whole project, but working with Kash Doll can be a good start.

Ever since the “CTRL” album, SZA has been on a tear. Everyone loves SZA, and I’m sure Drama is also a fan. Nowadays, DJ Khaled is calling SZA for a feature on his albums. It’s no secret why: she is a hitmaker! DJ Drama is no stranger to making hits, either. A hit producer plus a hit songwriter equals excellent music. Someone link SZA and Drama like now!

If you’re only now hearing of Armani Caesar, then it’s too late. The Griselda rapper can really rap! Please don’t sleep on her pen, as she does belong to the most lyrical group in the game. She dropped “The Liz 2” a few weeks ago, and the internet is eating it up.

Armani is someone you should definitely pay attention to. I hope she is on DJ Drama’s radar to get something done, as she will be hot in no time. Her raps are harder than the typical female rapper, which I know Drama can work with. Great things do happen when the North and South collide.

Armani Caesar and Kodak ate this. The musical chemistry >>>

Another legend in the industry, Ashanti, has nothing to prove. Twenty years later, she is still making music. And we are still loving it (and her)! Did y’all hear her float on the “Gotta Move On” remix? I imagine her sounding that good on a “Gangsta Grillz” beat too.

You may not want to admit it, but Cardi B can rap. She’s not the hardest out or the most lyrical, but she does have a good flow and knows how to make a hit. The Bronx rapper already has a legendary career, with her debut album winning a Grammy and her debut single that broke a 25-year-old record that Lauryn Hill held. A “Gangsta Grillz” mixtape would be a great addition to her career. This would also be too easy for DJ Drama; pretty much a layup.

Latto is on her way to becoming one of the biggest things in the South. Ever since she came in, Latto has shocked the world. This is not surprising, considering the “Big Energy” artist’s astonishing beauty and talent.

Latto’s ability to make hit songs and respectable lyrics have made her a fan favorite. She is originally from Columbus, Ohio, but she was in Clayton County, Georgia, by the time she was a teenager. DJ Drama has been through Georgia, so I’m sure both artists have crossed paths. I imagine this tape being a down-south banger!

It’s safe to say Megan Thee Stallion is one of the most prominent artists in the game right now. Everything she touches turns to diamonds, it seems. Whether it be music, television, or endorsements, the Houston hottie has the industry wrapped around her finger. Meg can rap with anyone, and what better way to assert her dominance over the game than with a “Gangsta Grillz” project. DJ Drama, go take a trip to Houston.

Let’s talk about how Megan Thee Stallion’s Plan B is one of Thee Best Rap Songs released this year🖤 pic.twitter.com/k1ABlnqo68

Yung M.A. can rap, and no one is in her lane. The New York rapper has a style like no other, as her personality is more extensive than her frame. DJ Drama has a pretty big personality as well. His confidence is always heard throughout his “Gangsta Grillz” projects. Yung M.A. can relate to that as she thinks highly of herself in her lyrics. A Yung M.A. and DJ Drama tape would be entertaining, funny, and hard!

Rapsody is one of those women that can stand toe to toe with the men of rap. You could put her up with the best, and she will shine.

Monica gets forgotten often, and I’m here to remind y’all who she is. The Atlanta singer has been giving us gems since the 90s! Her “So Gone” challenge will go down in history as many rappers rapped over her hit song. She hasn’t put out anything recently, but we know she still has something left in the tank. Atlanta is like DJ Drama’s second home, so I bet he knows where to find her. It’s about time two Atlanta legends link up.

One of the hardest females to ever grace the mic, DJ Drama would definitely have fun doing a mixtape with Remy Ma. Remy would also surely love doing a “Gangsta Grillz” tape. Nothing but straight rapping. Remy can rap circles around many rappers, both men, and women. A “Gangsta Grillz” production would remind people that Remy is a top emcee.

What more can we say about Mary J. Blige? Her career is already solidified, and she doesn’t need to prove anything else. Over 30 years in the game, Mary J. Blige is still doing her thing! She is a little older, but we still want more Mary!

DJ Drama would agree, but could he make it happen? Legends respect legends, so it shouldn’t be hard.

Honestly, I don’t know why this hasn’t happened yet. DJ Drama has been working with Lil Wayne since 2005. There’s no secret that they have formed a strong bond inside and outside the booth.

Lil Wayne signed Nicki Minaj in 2009, and that is one of the best moves he’s ever made. Since 2009, Wayne and Drama have kept their Dedication series going. In fact, Nicki has a few verses on a couple of those mixtapes.

So, has the conversation not come up? That’d be weird if it never did. A Nicki Minaj-DJ Drama “Gangsta Grillz” production would be fun to listen to. I imagine Drama just having Nicki go off on classic beats. There’s no question she is the number one woman to do a “Gangsta Grillz” mixtape with DJ Drama.

NICKI MINAJ IS THE QUEEN OF RAP!