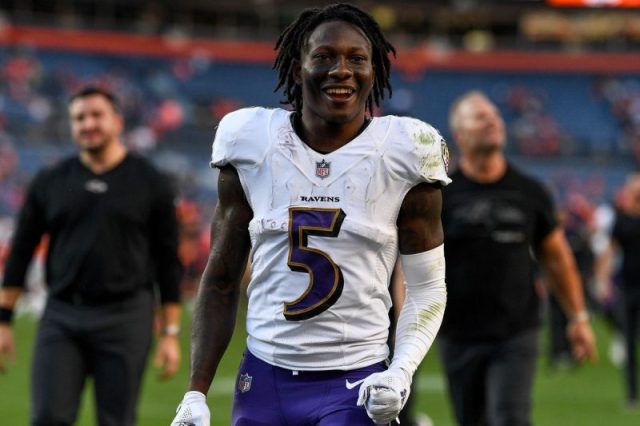 As we all know, criminal speeding is a severe problem worldwide. Whenever I am on the road, regardless of where I am, I always encounter someone recklessly driving at high speeds. Marquise “Hollywood” Brown, an Arizona Cardinals wide receiver, was arrested on Wednesday morning and charged with criminal speeding, according to KTAR News 92.3 FM and Arizona Sports.

In Arizona, a criminal speeding violation is defined as anything that exceeds 85 mph and travels at least 20 mph more than the posted speed limit. The violation is classified as a misdemeanor. It is the responsibility of citizens to adhere to the laws of their respective states. However, as the saying goes, not everything is as it seems.

Brown, drafted in the first round of the 2019 NFL Draft by the Baltimore Ravens, was arrested on Wednesday at 7:05 a.m. driving southbound on Loop 101 in North Phoenix while driving in a high occupancy vehicle lane. During his run, he reached a speed of 126 mph, according to Arizona Sports’ John Gambadoro. Marquise was later transported to the Maricopa County Jail.

As per sideline reporter Mark McClune, Brown was later released that same day on his own accord. His next court appearance will take place at 9 a.m. on Aug. 23.

Currently, there are no other details available.

Marquise’s Team Are Concerned About Him

Unless there is an emergency, it is best to avoid criminal speeding. Nevertheless, who has the motivation or energy in the early hours of the morning to commit such a crime? Unsafe driving is generally observed during the evening hours, but it can occur at any time of the day due to its unpredictable nature.

According to Arizona Sports 98.7, when reporters were observing the part of Wednesday’s practice that was visible to the media, the NFL wide receiver did not appear to be with the team.

“We are aware of the situation regarding Hollywood Brown and have reported it to the NFL office as required,” the Cardinals said in a statement. “We will comment further as appropriate.”

In the past week, Marquise had been listed as having an active non-football injury before his return to training camp on Tuesday due to a hamstring injury. During July, he suffered a hamstring injury from exercising on his own.

In the hours following Brown’s arrest, it remained unsure if coach Kliff Kingsbury knew about the receiver’s arrest during his media availability Wednesday morning, soon after the news of his arrest broke. However, he was concerned about Brown recovering promptly. The team and coach are hopeful that the 25-year-old will be able to practice next week without restrictions. Despite this, the Cardinals wanted to be innovative and consider Brown’s health the most crucial factor.

“We had hoped maybe this weekend, but we’re going to be smart, ” Kingsbury said. “When he’s back, I want him full speed and confident.”

It is wise to take an injury to a muscle seriously, as it can result in permanent damage. Sometimes, the recovery process is never complete if the tissue has been severely damaged. Before anything else, one’s health must come first.

Although the Arizona Cardinals and coach are worried about Marquise’s well-being, his role on the team has become even more vital now that his teammate and wide receiver, DeAndre Hopkins, has been banned for violating NFL rules regarding performance-boosting substances.

As a Baltimore Raven last season, Brown caught 91 passes for 1,008 yards, both of which were personal bests. In addition to this, he also scored six touchdowns. Regarding value, Brown is a valuable player the team is looking forward to having back on board again soon.