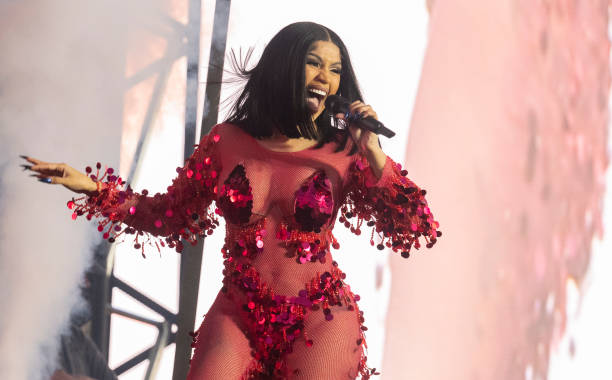 Cardi B hasn’t released in album in 4 years!  That’s a shame because her debut album, Invasion of Privacy, was received very well.  In fact, it won a Grammy for Best Rap Album in 2018!  What’s the holdup Bardi?  She is really busy after all; she is a mom of two and an A-list celebrity that does more than just music.  Just recently, a fan suggested that the Bronx rapper hasn’t dropped anything because she is afraid it won’t sell.

The fan said this on TikTok after Saweetie had very low sales number after releasing her new tape, The Single Life.  Cardi had time to clap back at the fan on Twitter.  She said she doesn’t have to put out another album if she doesn’t want to because of her Diamond records.  Her Diamond records include, her breakout hit, “Bodak Yellow” and “I Like It” featuring J Balvin and Bad Bunny, and “Girls Like You”, which is a collaboration with pop group Maroon 5.  She continued to add that her tours do numbers as well.  In 2019, her Arena Tour grossed an average of $1 million per show!  It’s safe to say Cardi B is living well and might not ever have to make another album again.

Get yall some whipshots for y’all eggnog pic.twitter.com/IL7V7pVsED

Invasion of Privacy is still doing numbers to this day!  The debut album is certified triple platinum.  She became the first female rapper to have multiple number-one songs at the same time on the Billboard Hot 100.  This album is the first album in music history to have all songs certified platinum or higher.  Invasion of Privacy is the best-selling female rap album of the 2010s!  With this much success, I don’t blame her for not rushing to record.  She may be taking a page from Rihanna’s book.  We know the Fenty owner doesn’t have to step in the booth ever again if she doesn’t want to.  Cardi may be on the same type of time.

Well, the world is waiting Cardi, we hope to hear from you soon!