Chester Rogers, known for his football career with six seasons on the field, has opened up about his role on BMF. And his account is intriguing, especially for those interested in what it takes to pursue two major passions. 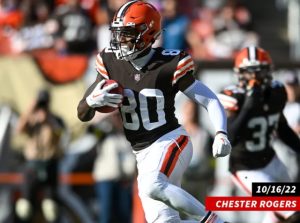 Rogers has worked to make a name for himself in the NFL. Now he’s blazing a trail in another sector, the television/film industry. While transitioning from football to acting may seem a stretch, it’s not for Rogers. In an interview with TMZ, Rogers revealed how he’s been pursuing acting since he was ten. And along the way, he’s nabbed a role or two. According to TMZ, Rogers appeared in a 2005 film alongside some big players in the film industry.  Rogers is said to have assumed the role of a young Billy Dee Williams, acting alongside such names as Gabrielle Union, Zoe Saldana, Hill Harper, and Billy Dee himself in the movie Constellation.  And that’s not small potatoes.

Rogers has directed much of his attention toward the NFL but has continued his pursuit of acting. And his current role in BMF serves as proof. According to Rogers, when he first got the part, he had low expectations regarding screen time. He went on to tell TMZ,

“I thought it was going to be one episode, one little scene,”

However, it turned out to be much more. He has been filming for six months and has had to turn down some NFL opportunities. Rogers went on to note,

“I’m in multiple episodes. My character continued to evolve. Throughout that time, I had to turn down almost ten different contracts from NFL to finish filming.”

One wonders, given such a decision, where his secret lies. How does he juggle both?

No one denies that juggling the NFL and acting is a challenging job. But Rogers is managing and undoubtedly loving every minute of it. And in this case, there is no need to wonder how he does both. Rogers does not shy away from revealing the secret of his success. As he so exclaims,

“it requires a helluva lot of “sacrifice” and “discipline.”

One couldn’t imagine it requiring anything less.

BMF, the hit series under the production of 50Cent, is currently streaming on Starz. The hit series dramatizes the exploits of the infamous “Black Mafia Family” under the leadership of Demetrius and Kevin Flenory. BMF is in its second season and continues to position itself as a wildly entertaining top-tier drama.

There is nothing like getting the chance to live your dreams fully. While so few get such opportunities, Rogers does, and he does whatever is in the realm of his capabilities to do both at the top level. So a round of applause to Rogers for landing a spot on the hit drama. But most of all, for pursuing his passions. His talent is admirable, but his work ethic is everything.