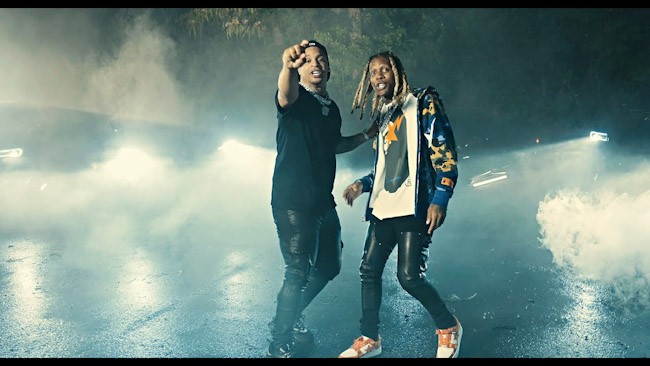 Doodie Lo and Lil Durk/ Credit: YouTube Did Shit To Me

Did Shit To Me by Lil Durk features Doodie Lo as the two-tag team on the new track. The song and music video hits the scene before Durk blesses the world with the 7220 (Deluxe) album.

Lil Durk delivers Did Shit To Me along with a music video for fans to enjoy. Jerry Production directed the video. Jerry was given the green light to guide the video in the direction of his choosing. He decided that the music video would have a street feel.

The Did Shit To Me video begins with Lil Durk squatting in front of the camera and Doodie Lo standing in the background. A cloud of smoke hovers between the two of them. The beat drops and the camera switches between two all-black cars racing through the streets and Lil Durk with Doodie Lo turning up with friends.

Between shots, Lil Durk is seen flashing stacks of cash, iced-out jewelry, and relaxing in a Ferrari. Doodie Lo is making Syrup; an intoxicating drink. Some camera shots show a group of people rolling dice. The entire Did Shit To Me video sticks to its roots of being street.

The Lyrics To Did Shit To Me

The song starts with an intro by Lil Durk, who uses the intro to talk about his million-dollar jewelry and fast cars. He also talks about his brothers being killers.

“Million dollars of jewelry on/ you know what I’m saying?/All fast cars outside”- Lil Durk (Did Shit To Me)

Next, Lil Durk takes the first verse. He talks about going to court and his homeboy being locked up. Lil Durk states how he only has faith in his gun and no one else.

After, the chorus comes on. Doodie Lo and Lil Durk take turns rapping lines. They brag about each other.

The two continue taking turns rapping on the second verse.

“Why that nigga lying inside his verse? He ain’t did shit to me” – Lil Durk “

“And my shorties caught him, he was loafing, that was for the free” -Doodie Lo

The contrast between the two rappers forces the listener’s ears to be interested. Doodie and Durk create a captivating moment in the song. Finally, the song ends after the chorus plays again.

Check out the music video below.