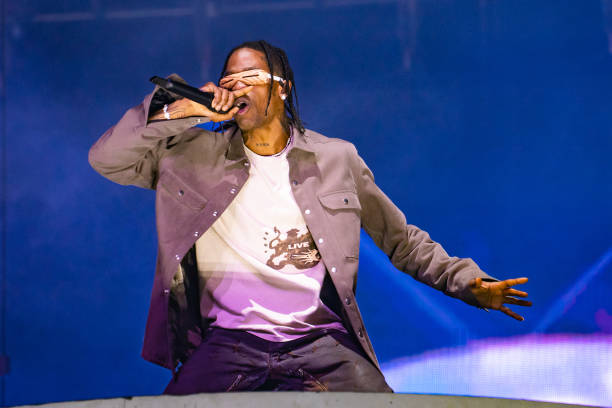 Travis Scott is set to make a comeback!  The Houston rapper headlined two concerts in London this past weekend.  It has been nine months since his Astroworld music festival.  Unfortunately, 10 attendees were killed with hundreds injured at that festival forcing Travis Scott to lay low for several months.  It’s hard for people to forget what happened that day.

In November 2021 at the NRG Park in Houston, Texas the Astroworld Festival took place.  With over 50,000 people in attendance, during Travis’s set, the crowd tried to rush towards the stage.  Rushing the stage caused many people to be stuck and out of breath.  Investigators of the incident named compression asphyxia as the cause of death for the 10 victims.  Compression asphyxia is where there is no respiration in your body because of external pressure.  Unfortunately, the concert still went on even with all the commotion leading people to questions Scott’s motives.

In front of 20,000 fans at the O2 Arena, Scott performed new songs from his next album, Utopia.  The album is set to have verses from Swae Lee, Bryson Tiller, and 21 Savage.  He even treated fans to a track featuring Kanye West.  The track titled, “God’s Country” was supposed to be on Kanye’s Donda album, but it never made it.  Scott also performed “Lost Forever”, featuring Westside Gunn and James Blake.  He debuted this song at the Billboard Music Awards earlier this year.

After his show, he was met by his good friends NBA stars James Harden and Kevin Durant.  They embraced him and celebrated him for his first headlining show since Astroworld festival.  His wife, Kylie Jenner, and Stormi were also there to support him.  Kylie caught the celebration on camera and posted the trio to social media.  In the video, Travis can be seen shirt-off, yelling, and screaming banging his hand against the door.  James Harden joins him while Kevin Durant pops a bottle of champagne.  This video was met with criticism as fans thought he was being insensitive after what happened at his festival.  They said he is still “raging” and isn’t a good look.

With his fourth studio album in the works, people are wondering if Utopia will honor the victims of the Astroworld festival.  Fans feel he should at least mention it on the album.  Before the album, he has a residency at Las Vegas from September 17-October 15.  “Road to Utopia” consists of seven shows and will be at the Zouk nightclub.