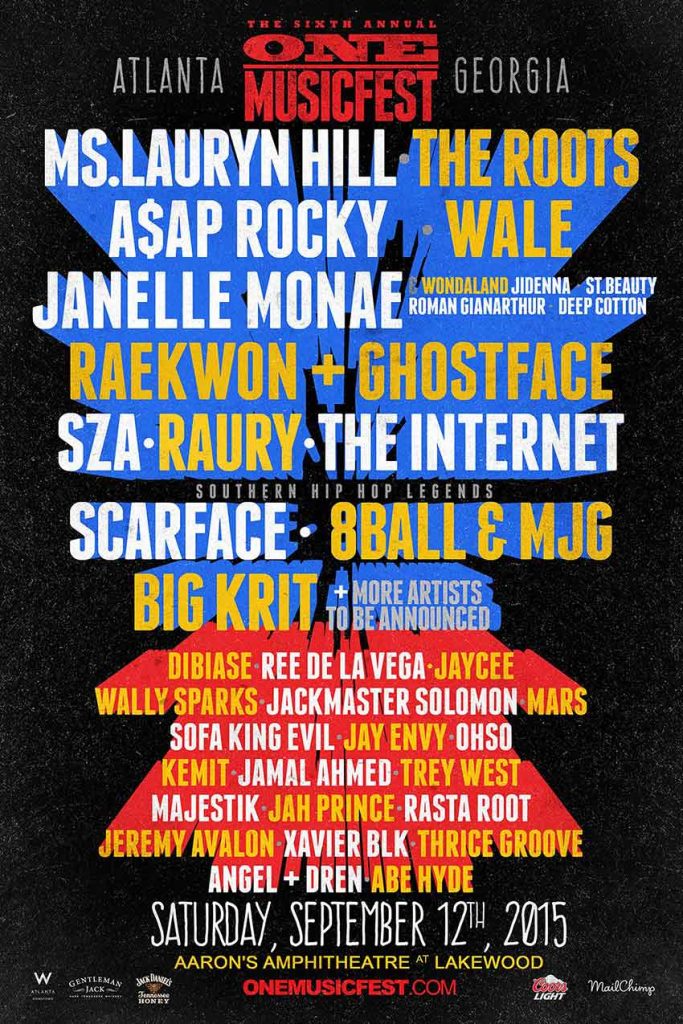 ATLANTA, GA [June 16, 2015] –   Today ONE Musicfest, in partnership with Live Nation, announce the 2015 music lineup for one of the most anticipated festivals to take place in the Southeast. Reaching its sixth year of bringing together the best of urban alternative legends and contemporaries for a unique experience through music and visual, One Musicfest is pulling out all the stops with this year’s roster of performances.  Organizers have meticulously curated talent to include: Ms.Lauryn Hill, The Roots, A$AP Rocky (currently having the number one hip hop album in the country), Wale, Janelle Monae & Wondaland, Raekwon, Ghostface, The Internet, Raury, SZA, Scarface, 8Ball & MJG, Big KRIT and many more to be announced. The festival will take place at Aaron’s Amphitheater at Lakewood on Saturday, September 12, 2015.

One Musicfest will take place on multiple stages and will serve as the ultimate mashup of innovative urban alternative acts with over eleven hours of non-stop music. The festival will feature over 25 of the hottest global DJs whose music crosses over to all spectrums, local vendors, games, and interactive activities. One Musicfest is the only place to see this roster of incredible acts join together for One purpose  – which is to witness a wide variety of sounds, from rock to hip-hop, electro, reggae, funk, disco, house, alternative and soul while having your musical senses stimulated.

Founded by Jason Carter, ONE Musicfest has been one of Southeast’s largest home-grown, musical arts festival to date including over 10,000 plus attendees. Carter has brought Atlanta music lovers the best and the brightest urban alternative acts performing in a welcoming, hospitable setting, creating an atmosphere where everyone can enjoy and discover music.

For more information and to purchase tickets please visit www.OneMusicFest.com or get social by following ONE Musicfest on Twitter/Instagram @ONEMusicfest with the hashtag of #OMF2015.