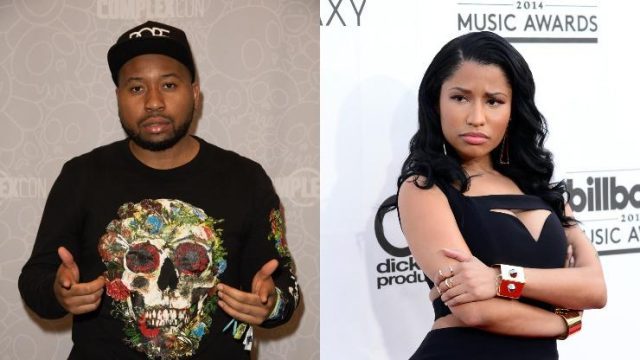 In an interview recently conducted by VladTV, The DJ Akademiks spoke about an instance in which Nicki Minaj attempted to “silence” him by trying to have him fired and intimidate him and his family.

Akademiks stated that his issues with Minaj became increasingly heated in 2019 when he commented on the rap star’s breakup with Meek Mill. He expressed his belief that the split would have no adverse effects on Meek’s career. As a result of Akademiks’ words, Minaj began to ask about Akademiks’ whereabouts before contacting him on social media via direct messages.

“You’ve been mad since I made a joke about you with Joe on my show,” said host DJ Vlad as he read off the alleged texts Minaj sent to Akademiks. “The people you rep won’t stop your job from being broke. I know too much about your family for you to be playing with me, you h*e a** rat. Where you at now? Send your number. My husband wants to talk to you. If I were you, I’d send my number ’cause you’re gonna make it worse.”

The DJ Akademiks Comments On Nicki’s Artwork For 2014 Single

Previously, Akademiks expressed his opinion regarding the artwork of her 2014 single “Looking Ass.” It featured the iconic photograph of Malcolm X peering out his window while holding a firearm. He felt the artwork was in poor taste.

“That’s a reason why social commentary will come into play,” explained Ak of his stance regarding the artwork. “So, I gave my opinion on that and it clearly wasn’t well received.

“And at this time, I’m getting hundreds of thousands of views on everything I speak about and I believe I got some legal notice that it was copyrighted, which it’s not and I fought against it, but I was very public in fighting against that. I said, ‘Nicki is trying to take my sh*t down.’ I let it be known and it ended up staying up.”

Akademiks Giving Nicki Her Credit, While Being Honest About The Barbz

Akademiks has nevertheless credited the Queen artist with building such a strong and devoted fan base. Also, who backs her without reservation, regardless of whatever critics exist.

“You know why Nicki’s good? I wanna say great…her audience, and she has the best audience in Hip-Hop. Them Barbz, they will never believe anything—and Nicki does a good job of not making it apparent. You ‘heard’ it, you didn’t ‘see’ it,” he explains of the reports or gossip that is usually shared about the rapper. “So, like, when you say it, her audience is gonna take it as, ‘Oh, you’re just hating on Nicki.’”

Previous Threats Made By ‘Pills And Potions’ Rapper

Akademiks (real name Livingston Allen) tweeted on Sept. 9: “Nicki Minaj just put a hit on me… if anything happens… or I miss a meal… SHE DID IT.” That “hit,” allegedly, was a threat to break his jaw. In an attempt to demonstrate this, he supposedly showed screenshots of Instagram DM messages that he posted live on Twitch, read aloud on Complex’s Everyday Struggle, and live-streamed on Twitch.