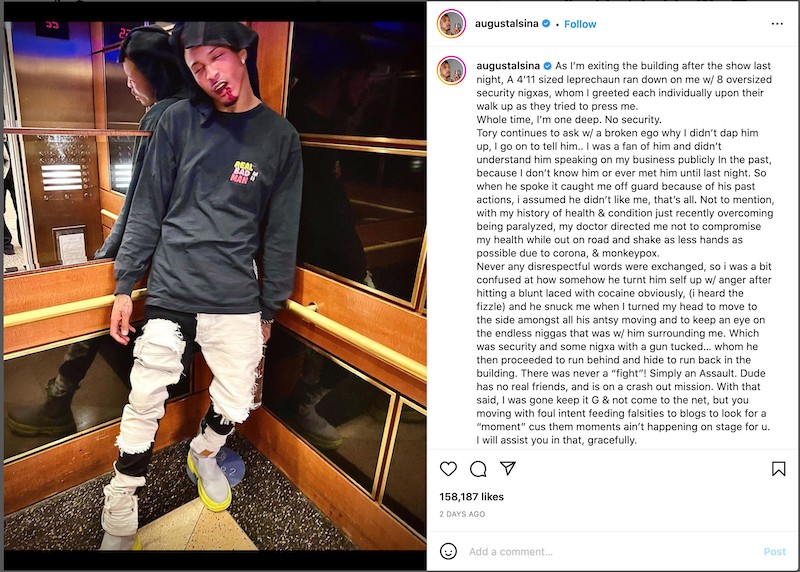 A video leaked after August Alsina’s verbal confirmation about him and Tory Lanez’s altercation. According to the footage, the two musicians got into it after Alsina ignored Lanez’s handshake. Following Lanez’s shocked reaction, the “Say It” rapper and his entourage ambushed him.

Although there’s no footage of the exact interaction, bystanders got clips of what happened before and after this verbal (and allegedly physical) incident. Someone is also trying to remind Lanez about his current troubles with the law. “Nooo,” they say while another person says, “Don’t do it. You already shot Megan.”

After the alleged fight, a person asked, “You knocked his ass out, Tory?” to which someone else said, “Tory says he just knocked August Alsina’s ass right out. One punch crushed him.”

The Past Altercations Between Tory & August

In the past, Lanez and Alsina have gotten into a heated conversation. The “Entanglement” singer felt a way after hearing Tory’s comments on his relationship with Jada Pinkett Smith. Angered about what was said, Alsina confronts Lanez, saying, “What up? I hate when n-ggas don’t keep the same energy with me.”

Tory, who seemingly sounded confused, replies, “What energy?” Then, August says, “Why did you speak on my business online?” Lanez says, “Hold on, hold on,” before the audio cuts out. Sources also say that Tory reportedly smoked “a blunt laced with cocaine” and punched Alsina before hiding behind his security.

Alsina alleges that this physical altercation has left him with several injuries. According to photos he posted online, he had bruises on his elbow, lip, and knee.

Tory has denied these statements. On Sunday, he hopped on the phone with Akademiks and said

“Nothing happened. I don’t even know what this kid is talking about.”

He also claimed through his Instagram Story that he’s been working, shying away, and staying out of trouble.

“I don’t know what everybody is talking about…But I’ve been in the studio. I’m not in anything negative…I’ve been working on myself,” Tory Lanez wrote, adding several smiling faces with halo emojis.

All this hostility likely comes from a line Lanez used in a short video regarding August Alsina and Jada Pinkett Smith’s situation. With Lil Baby’s “We Paid (feat. 42 Dugg)” instrumental in the background, Tory spat at the time:

“Let me start fucking on Jada; I ain’t gon’ snitch like August.”