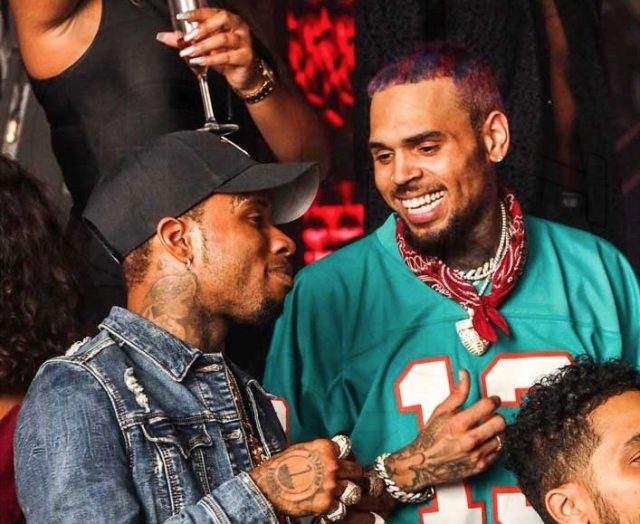 Tory Lanez has hailed Chris Brown as the King Of Pop. The rapper gifted Chris Brown quite the iced-out chain. The chain has a pendant that has a photo of brown in a fedora with suspenders with the label “King Of Pop” On the back of the necklace is an engravement of Chris Brown’s nominations and awards, giving the receipts of why Lanez labels him as the new king of pop.

“@chrisbrownofficial IS THE KING OF POP WHEN IT COMES TO MY ERA AND MY GENERATION …….IDGAF,” Lanez wrote in an Instagram post. “My dawg held me down in a time when most of the world left me for dead !!! I feel like This is a well-deserved gift …. For so many reasons !!! Most of those reasons I engraved on the back of the chain !!!! Enjoy it my boy!”

Michael Jackson held the title of the King Of Pop previously. To some, it may still be Jackson but for Lanez and for others, Brown is this generation’s King of Pop. Fivio Foreign name dropped Brown as the closest thing to Jackson when responding to LondonOnDaTrack’s question about the topic. Brown spoke about the comparison in a recent interview with Big Boy.

Throughout the years, Lanez and Brown have had a great share of collaborations. Lanez was recently featured on Brown’s latest album Breezy for their song “Bad Then A Beach.” Previous collaborations include “Feels,” “Lurkin,” “Tell Me How You Feel,” “The Take,” “Duck My Ex” and “Flexible.”

Brown is currently on the road in support of Breezy with Lil Baby. The tour was a part of Drake’s October World Weekend. Other stops include Charlotte, Atlanta, Phoenix and Los Angeles. It is set to conclude on August 27 in Las Vegas, NV. Tickets for all shows are on sale now.