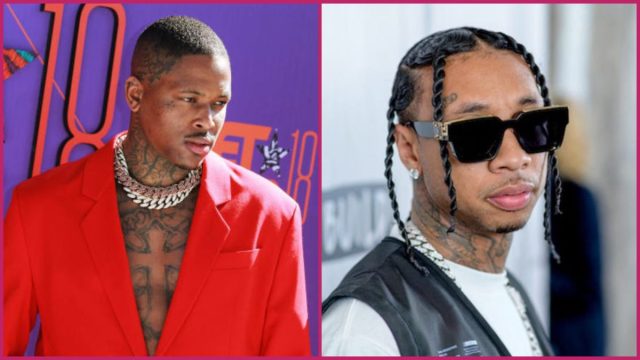 This year we are entering a new era within the rap and hip-hop culture. YG and Tyga dressed up as “white chicks” in a new video teased for  YG’s single “Run” featuring Tyga, 21 savage, and Bia.

On Wednesday, June 22nd, YG took to his Instagram to tease the new music video to his song “Run”

In the video, YG is driving in a bright red Porsche busting out some moves as Tyga rides passenger. The only odd part about the clip was that YG and Tyga didn’t look like YG and Tyga. The two rappers were seen covered in White Chicks-style makeup, wearing all-black bumping to YG’s new track. Many fans believe the rappers were portraying Kim and Khloe Kardashian. YG as Khloe and Tyga as Kim as YG shouts, “Calabasas forever!” which happens to be the Kardashian’s hometown.

YG and Tyga on set for their new music video 🎬 pic.twitter.com/0XC7ySaI2e

The clip sparked many opinions from fans as well as Shawn and Marlon Wayans from the 2004 comedy film, White Chicks. Twitter seems to find the short clip hysterical. One user @nniicoleeee tweeted“not me looking for tyga and yg and they the mfs inna car.” Another fan @KPkonfidential said, “boy YG & Tyga washed as fuck. tf are they doing?!”

not me looking for tyga and yg and they the mfs inna car 😭 https://t.co/kC997JKYYB

boy YG & Tyga washed as fuck. tf are they doing?!

According to Hip-Hop DX, back in February YG announced his forthcoming sixth record, Pray For Me by dropping off his “Scared Money” single with J. Cole and Moneybagg Yo. His single “Run” will hit streaming services on Friday, June 24th. It will most likely appear on the album as well.

In an interview with Power 106, YG discusses how he chooses his features.

“When I do the features I be doing, it’s always who would be unexpected or who I ain’t work with yet or who is really gonna do the record justice lyrically with bars… The music is just gonna be my truth, as far as my life right now… It’s just the growth of me, my headspace, what I’m on in life.”