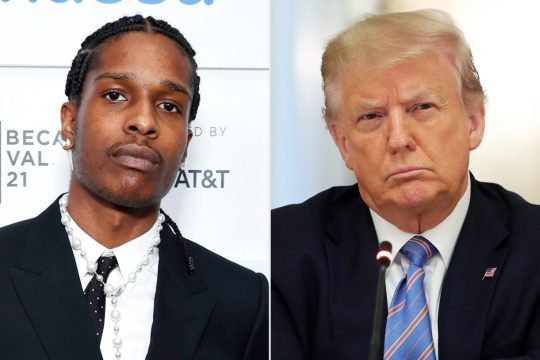 Former President Donald Trump’s demands for A$AP Rocky’s release in Sweden three years ago nearly started an international trade war. Sweden’s Justice Minister, Morgan Johansson, recently revealed that Trump threatened to impose trade restrictions if Rocky was not released. The Justice Minister said that Trump used traditional bullying tactics. He also stated, “If you can try and do something like this against Sweden, what will you then try and do to slightly weaker countries that don’t have the European Union behind them?” This comes as a shock to many who did not think the issue was that serious.

The arrest gained a lot of attention and took the internet by storm. People online had a mixed reaction. Some were against A$AP while others rallied behind him. Fellow rapper Kanye West was one of many who rallied behind the New York rapper.

Kanye displayed his support for A$AP Rocky by stating

“I watched the tapes of A$AP Rocky, and he was being followed and harassed by troublemakers. Treat Americans fairly. #FreeRocky.”

How it All Started For A$AP Rocky

A$AP Rocky, also known as Rakim Mayers, was arrested three years ago on June 30, 2019, in Stockholm. It was reported that Mayers and his two bodyguards beat up a fan outside a fast-food restaurant. They kicked the 19-year-old man and even hit him with a bottle. The assault was caught on video and quickly spread online. In Addition, a video of Mayers trying to be a peacemaker before the violence started surfaced as well.

As a result, Mayers spent close to a month being imprisoned. After a two-week trial, the rapper was found guilty of assault against the 19-year-old man. However, according to Mayers and company, the man was harassing them and shouting racial slurs. Luckily for Mayers, he did not go to prison.

Want more news like this? See related topics at FMHipHop.com