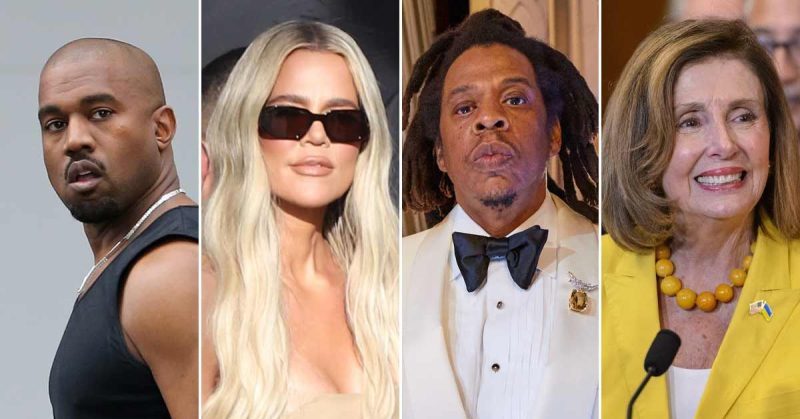 Being wealthy must be a pleasant experience. The general perception in this country is that it cares primarily about making the rich richer and the poor poorer. Several high-profile celebrities who received millions of dollars in government Paycheck Protection Program (PPP) loans for their companies have been exempt from paying back the total amount.

Which Types Of Businesses Were Eligible For PPP Loans?

PPP loans were also provided to businesses closely associated with the Trump administration’s senior adviser Jared Kushner and House Speaker Nancy Pelosi’s husband, Paul Pelosi. However, according to a Daily Mail article entitled, “It Pays to Be Rich,” these businesses were not held accountable for paying the loans back.

Due to the Covid pandemic, the $953 billion program was developed to assist needy businesses. However, according to Forbes, it soon came to light that many small businesses were having trouble acquiring loans. At the same time, dozens of billionaire-owned and private equity firms could do so.

Thus, the question arises! Does the government place a higher level of trust in the rich with their funding than in working-class citizens?

Stars Who Have Had Their Debt Forgiven

As the first publication to reveal the amount these wealthy corporations have received from the Payment Protection Program, Daily Mail has the unique opportunity to explore these figures in greater detail.

Jared Kushner, with a net worth of $800 million, is one of the celebrities who received PPP loans and were forgiven. Three PPP loans have been granted to Kushner’s family for their various businesses, allowing them to expand their operations. In total, he received $3,001,119.

Actress Reese Witherspoon, whose net worth includes $400 million and the Draper James LLC clothing company, was provided $975,472 in the first round of the PPP program to pay her payroll and rent. In addition, her loan was forgiven accordingly. 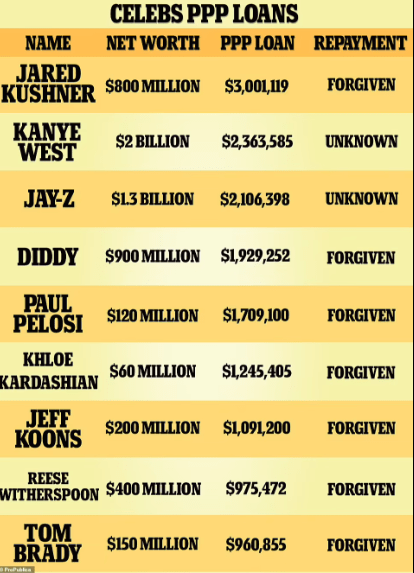 This photo details the exact amounts taken out by these millionaires and some billionaires through the government’s program. Credit: Daily Mail / ProPublica

Several wealthy individuals have worked hard to accumulate their wealth. Nevertheless, shouldn’t those who need loan forgiveness be treated the same way? As a result of low-paying and minimum-wage jobs, many college students and graduates face overwhelming amounts of student loan debt. They desperately need assistance in repaying these loans.

Furthermore, once Tom Brady retires from football, he is expected to become the first billionaire in sports history. Aside from his salary as a professional athlete, he will also earn income from his wellness website, TB12. His site, which he co-founded with Alex Guerrero, promotes the Tom Brady diet plan.

Brady’s brand, TB12, is built around his lifestyle philosophy for those interested in a more in-depth explanation. His methods have allowed him to achieve unprecedented success at the NFL level. The Brady Method consists of several elements, including exercise, nutrition, and expensive pajamas.

Forgiveness Has Been Offered To More Celebrities

Moreover, the Daily Mail also reports that Kanye West has received a loan of $2.3 million for his company, Yeezy. However, ProPublica, a non-profit organization that has published all federal loan amounts and their statuses, indicates that Yeezy’s loan status is not publicly available.

Check out what people had to say regarding the forgiveness of loans to wealthy celebrities below.