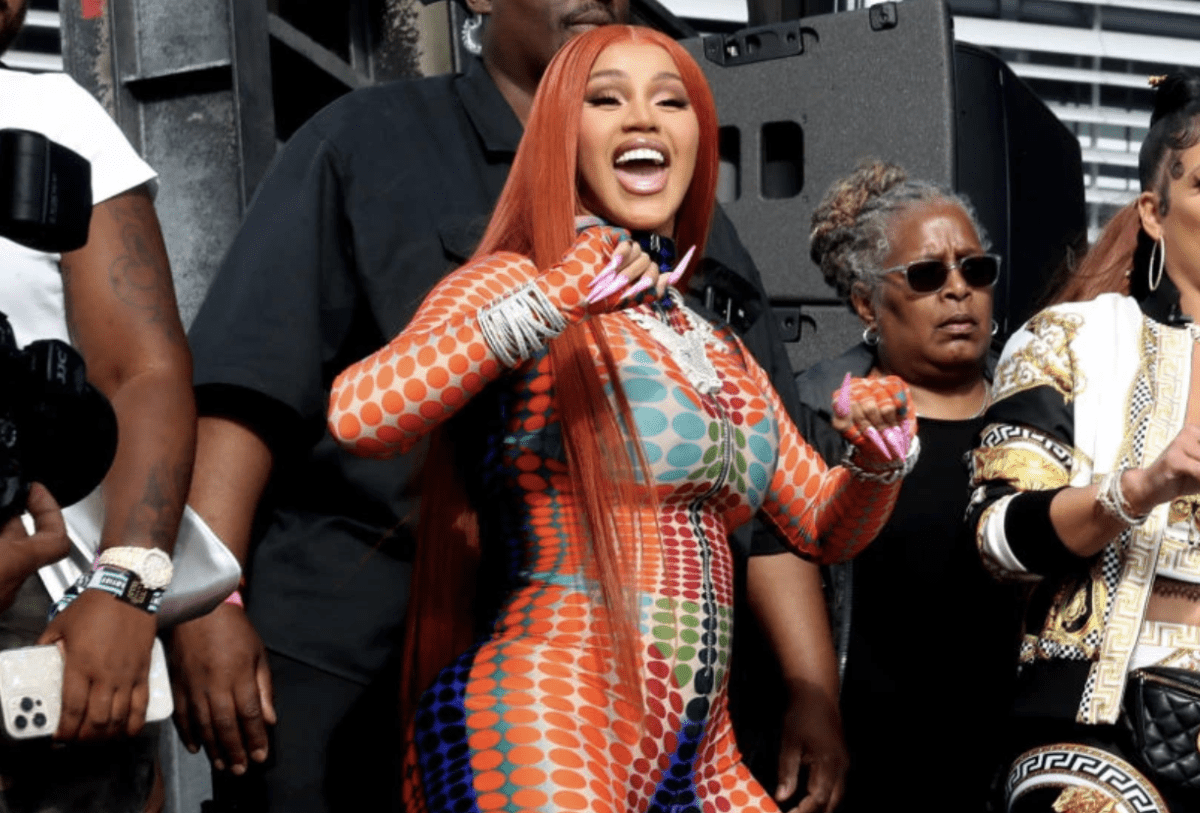 Good thing the rain held up at Hot 97 Summer Jam this year.  It usually always rains at MetLife stadium in East Rutherford, New Jersey.  This year, Summer Jam was an all-day event.  Yes, almost 10 hours of nonstop hip-hop.  The star-studded concert always has a festival stage for the new and upcoming artists outside of the stadium.  The main stage, inside MetLife, is for the big acts.

NY artist K. Goddess started the day off on the festival stage. She was the winner of last year’s Hot 97’s “Who’s Next” competition, but she didn’t get to perform because of the pandemic.  She finally got her moment and seized it!  The Girll Codee, Cordae, Bleu, Saucy Santana, Babyface Ray, Nardo Wick and Jnr Choi also blazed the festival stage.  Hot 97’s DJ Drewski brought out New York’s own Nems to perform as well as B-Lovee and Dougie B.  Surprisingly, Cardi B jumped on stage with the latter two to perform their hit “Shake It.”

After Cardi B surprised fans, the show moved to inside MetLife Stadium. DreamDoll went first as she brought out her fellow Bronx native Capella Grey to perform their song “You Know My Body.”  She also had CJ come out to perform his hit “Whoopty.”  Shenseea came up next followed by Benny the Butcher.  The Buffalo native rocked his 20 minute set.

Fans were happy to see Roddy Ricch make it after he missed his Governor’s Ball set over the weekend.  On Saturday, he was charged with criminal possession of a weapon, possession of a large capacity ammunition feeding device as well as unlawful possession of the device.  Yesterday, the charges were dropped, and he was able to perform, even bringing a special guest, DJ Mustard.

One of the greatest things about the night was the DJ Kay Slay tribute.  The HOT 97 family came together on stage to pay their respects to the prominent DJ before the select artists performed.  Jim Jones, Maino, The L.O.X. Papoose, Busta Rhymes, Remy Ma, and Juelz Santana all hit the stage in honor of Kay Slay.  All these artists have a warm spot for Kay Slay in their hearts as they have worked with him throughout their careers.

As the day turned to night, Pusha T took over the stage.  His set included songs from his most recent album as well as his hits with the Clipse, most notably “Grindin.”  Atlanta rapper Lil Baby took the stage next to perform a lot of his hits. His friends Young Thug and Gunna were not present, but YSL was still in the building.  A message from Young Thug was played thanking his fans and assuring them he is okay.  After Lil Baby, it was Lil Durk’s time to perform as he brought out Nardo Wick and Meek Mill.

Meek Mill took the opportunity to shed light on what is going on in the state of hip hop.  He discussed the “Protect Black Art” campaign, which will help to stop courts from using song lyrics as evidence. Meek mentions how a lot of other rappers including himself can be put in the same position as Young Thug and Gunna if the petition doesn’t get signed.

Young Thug had a message for fans at Summer Jam 🗣 pic.twitter.com/gSXo78lqtu

The headliner of the night was Fivio Foreign.  He closed the show out in style with appearances from Jnr Choi, Coi Leray, and Chloe Bailey. He ended the show with a plethora of people on stage as he performed “Big Drip”.  A great night for hip hop like always.  So many artists and so many great performances!  And most importantly, the weather held up!