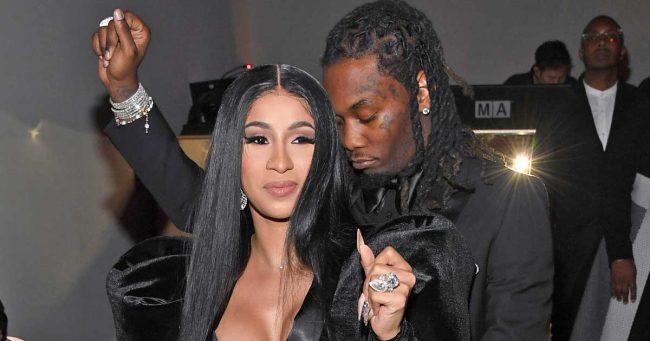 Cardi and Offset pictured together. Image via Getty

They are back! Cardi B and Offset who have worked numerous times together are dropping a new music video soon. Its no doubt that the pair feature on hip-hop’s hottest couple list, and now they will be working together on Offset’s new disk with the 29-year-old songstress who will be directing this time! She recently posted on Twitter that she will be directing alongside a ‘Very sexy, Talented artist”. We’re left wondering who’s the artist in question now.

Cardi Chosen Artist Is Under Wraps

This week, Cardi briefed a bit about her previous and current projects right after posting a dance project she worked for and included in her song “Press”. The rapper was very proud of her work and tweeted :

“Love it,” the New York native began. This was not my highest song but this was one of my best videos… DIRECTED BY ME!”

Her music video “Press” has over a 100 million views on YouTube. Fans responded to the artist recommending she switch more to the directing side, so she happily replied :

“I’m directing one [of] Offset’s music videos with a very sexy, talented artist. It’s going to (be) amazing.”

The chosen celeb remains a shot in the dark so far for all fans. Many are speculating that it could the star Chloe Bailey who replied to the latter’s tweet. Additionally, Offset reported having worked with the Atlanta-born songstress during his interview at Bardi Gang Radio.

While the hip-hop star has been bossing on the ‘Invasion of Privacy’ album, her hubby dropped a few solos. His partners aka Migos members worked separately on their musical projects. Lately, he recorded the a new banger entitled “5 4 3 2 1” which will be aired soon. Moreover, the rapper will be releasing another named ‘CODE’ in collaboration with Moneybagg Yo.

In case you missed it, check out Offset new song below.