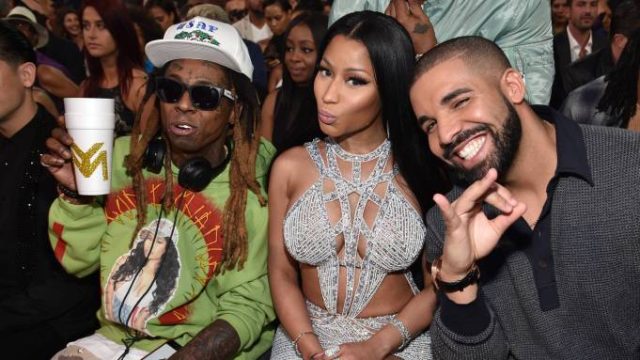 It’s no doubt that Drake, Lil Wayne, and Nicki Minaj are some of the world’s best rappers.  Together the trio has put out amazing tracks over the years and hit the charts like no other. This past weekend, Drake named Lil Wanye and Nicki Minaj two of the greatest musicians of all time.

According to Hot New Hip Hop, Drake had some positive words for the two artists during his Young Money reunion concert in Toronto this past weekend. The legendary performance included a variety of the trio’s major hits such as “BedRock,” “Every Girl,” and “The Motto.”  After Drake finished his set of “Jimmy Cooks,” “What’s Next,” and “Over The Top,” the rapper took a moment to praise the Young Money members.

“It’s been a long time since we been here and been able to do this together. First and foremost, I just wanna say tonight I got to stand in the crowd and watch two of the greatest musicians of all fu*king time. I’m so grateful to be a part of that team.”

Drake continues to say, “the most selfless man on planet earth.” Referring to Lil Wayne he adds “I’m your son, look at this sh*t, You did this. You did this sh*t. This is the greatest city in the world.” Stating he’s standing next to two of the greatest rappers, pointing out Nicki, “she’s over there with the pink hair. By the way, like, are these bi*ches serious? Like, nobody can f*ck with Nicki.”

Drake expresses his gratitude to Lil Wayne who helped jumpstart his and Nicki Minaj’s careers during their reunion show tonight at OVO Fest. ❤️ pic.twitter.com/Ds0uDykpeu

After showing some love for the Young Money Team, Drake continued to joke about the negative response’s he’s been receiving from his latest album, Honestly, Nevermind. The Certified Lover Boy artist called the project one of the greatest things he ever did. He even admitted many people hit him up saying, ‘You know, that shit’s too fast, I don’t know… you makin’ like Zara music.”